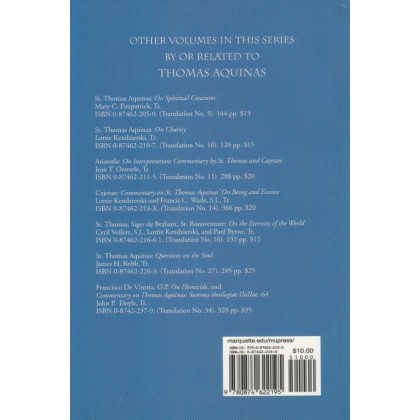 RM50.00
On the Unity of the Intellect Against the Averroists
Notify Me

Mediaeval Philosophical Text in Translation No. 19

During St. Thomas's second sojourn at Paris (1268 - 1272), masters and scholars were discussing Averroes' views on the intellect. Even less erudite men were aware of the doctrine that there is only one intellect for the whole human race. William of Tocco, an early biographer of Thomas Aquinas, tells of a certain soldier at Paris who was unwilling to atone for his sins because, as he put it: "if the soul of the blessed Peter is saved, I shall also be saved; for if we know by one intellect, we shall share the same destiny".

Against this error that there is one intellect for all men, Thomas Aquinas wrote, continues William of Tocco, "a wonderful work (Scriptum Mirabile) in which ... through the very words of Aristotle which Averroes misunderstood, he pulled out this error by the roots... so that no one who could grasp the words of Aristotle would doubt that the aforesaid error was contrary to reason." (Quoted by Mandonnet Siger de Brabant, p. 103) The scriptum mirabile to which William of Tocco referred was the De Unitate Intellectus Contra Averroistas.

The Critical Edition of the Latin text by Leo W. Keeler, S.J., was used for the English Translation contained in this book. An introduction, a bibliography, and notes are included as aids to the study of the treatise.