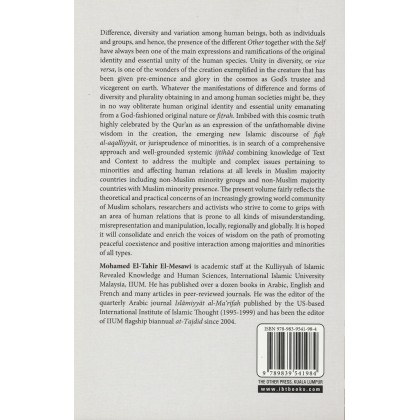 The Question of Minorities in Islam; Theoretical Perspecives and Case Studies - Paperback

Difference, diversity and variation among human beings, both as individuals and groups, and hence, the presence of the different Other together with the Self have always been one of the main expressions and ramifications of the original identity and essential unity of the human species. Unity in diversity, or vice versa, is one of the wonders of the creation exemplified in the creature that has been given pre-eminence and glory in the cosmos as God’s trustee and vicegerent on earth. Whatever the manifestations of difference and forms of diversity and plurality obtaining in and among human societies might be, they in no way obliterate human original identity and essential unity emanating from a God-fashioned original nature or fitrah. Imbibed with this cosmic truth highly celebrated by the Qur’an as an expression of the unfathomable divine wisdom in the creation, the emerging new Islamic discourse of fiqh al-aqalliyyat, or jurisprudence of minorities, is in search of a comprehensive approach and well-grounded systemic ijtihad combining knowledge of Text and Context to address the multiple and complex issues pertaining to minorities and affecting human relations at all levels in Muslim majority countries including non-Muslim minority groups and non-Muslim majority countries with Muslim minority presence. The present volume fairly reflects the theoretical and practical concerns of an increasingly growing world community of Muslim scholars, researchers and activists who strive to come to grips with an area of human relations that is prone to all kinds of misunderstanding, misrepresentation and manipulation, locally, regionally and globally. It is hoped it will consolidate and enrich the voices of wisdom on the path of promoting peaceful coexistence and positive interaction among majorities and minorities of all types.