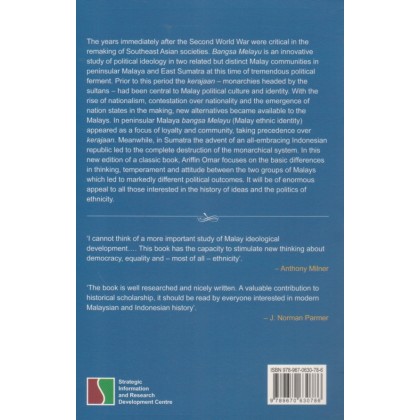 The years immediately after the Second World War were critical in the remaking of Southeast Asian societies. Bangsa Melayu is an innovative study of political ideology in two related but distinct Malay communities in peninsular Malaya and East Sumatra at this time of tremendous political ferment. Prior to this period the kerajaan – monarchies headed by the sultans – had been central to Malay political culture and identity. With the rise of nationalism, contestation over nationality and the emergence of nation states in the making, new alternatives became available to the Malays.

In peninsular Malaya bangsa Melayu (Malay ethnic identity) appeared as a focus of loyalty and community, taking precedence over kerajaan. Meanwhile, in Sumatra the advent of an all-embracing Indonesian republic led to the complete destruction of the monarchical system. In this new edition of a classic book, Ariffin Omar focuses on the basic differences in thinking, temperament and attitude between the two groups of Malays which led to markedly different political outcomes. It will be of enormous appeal to all those interested in the history of ideas and the politics of ethnicity.