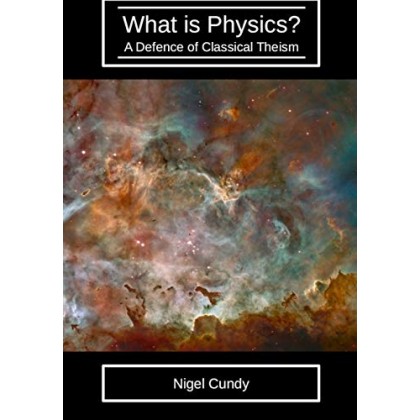 What is Physics?: A Defence of Classical Theism - Softcover

If God exists, what sort of universe would He create?

The ancient Greeks thought that the study of physics required listing the possible causes and tendencies of every different type of being. Theists believe that physics is a description of how God sustains the universe. Geometers believe that physics is a mathematical representation of reality; or perhaps a mathematical representation of our opinions about reality. Mechanists say that it is a description of fixed and unbreakable laws, independent of God, which matter is blindly compelled to obey. Empiricists say that it is a collection of experimental data.

Ideas have consequences, and fundamental axioms no less than anything else. It ought to be possible to begin with what we believe physics represents, and through careful reasoning conclude with a picture of its laws. If physics is a description of how God sustains matter, then the laws of physics should in some way reflect God’s nature. So what can we deduce concerning the mathematical laws, which today’s physicists are painstakingly uncovering, from what theists believe about God? And how well do those predictions line up against reality?

And what about the philosophies which inspired Galileo and Newton, and led to modern atheism? What form would we expect physical law to take if we assume those premises are true? And how well does that line up against our current knowledge, now that Newton’s theory has been superseded by quantum field theory and general relativity? Do the renaissance and enlightenment arguments against theism and classical philosophy still stand in the light of today’s best science?

At the start of the twentieth century, it seemed as though modern science and theism were in the deepest conflict, from which there could be only one victor. But today, does physics still fight against theism, or has it instead turned its weaponry against atheism?