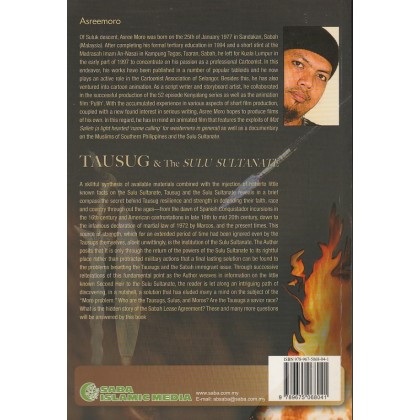 ​
A skillful synthesis of available materials combined with the injection of hitherto little known facts on the Sulu Sultanate, Tausug and the Sulu Sultanate reveals in a brief compass the secret behind Tausug resilience and strength in defending their faith, race and country through out the ages - from the dawn of Spanish Conquistador incursions in the 16th century and American confrontations in late 19th to 10th century, down to the infamous declaration of martial law of 1972 by Marcos, and the present times. This source of strength, which for an extended period of time had been ignored even by the Tausugs themselves, albeit unwittingly, is the institution of the Sulu Sultanate. The author posits that it is only through the return of the powers of the Sulu Sultanate to its rightful place rather than protracted military actions that a final lasting solution can be found to the problems besetting the Tausugs and the Sabah immigrant issue. Through succesive reiterations of this fundamental point as the author weaves in information on the little known Second Heir to the Sulu Sultanate, the reader is let along an intriguing path of discovering, i a nutshell, a solution that has eluded many a mind on the subject of the "Moro problem". Who are the Tausugs, Sulus and Moros? Are the Tausugs a savior race? What is the hidden story of the Sabah Lease Agreement? These and many more questions will be answered by this book.