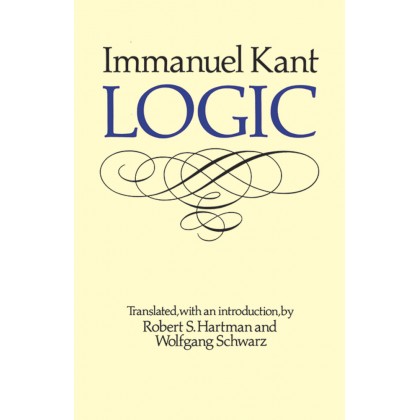 The second, corrected edition of the first and only complete English translation of Kant's highly influential introduction to philosophy, presenting both the terminological and structural basis for his philosophical system, and offering an invaluable key to his main works, particularly the three Critiques. Extensive editiorial apparatus.

Introduction
I. The Concept of Logic

II. Main Divisions of Logic
Different Ways of Its Presentation
Usefulness of This Science
Outline of Its History

IV. Short Outline of a History of Philosophy

V. Cognition in General
Intuitive and Discursive Cognition; Intuition and Concept and Their Difference in Particular
Logical and Aesthetic Perfection of Cognition

VII. B) Logical Perfection of Cognition as to Relation Truth
Material and Formal or Logical Truth
Criteria of Logical Truth
Falsity and Error
Semblance as the Source of Error
Means of Avoiding Errors

VIII. C) Logical Perfection of Cognition as to Quality Clarity
Concept of a Characteristic as Such
Different Kinds of Characteristics
Determination of the Logical Essence of a Thing
"Distinctness, a Higher Degree of Clarity"
Aesthetic and Logical Distinctness
Difference Between Analytic and Synthetic Distinctness

IX. D) Logical Perfection of Cognition as to Modality Certainty
Concept of Holding Something to Be True
"Modes of Holding-to-Be-True: Opinion, Belief, Knowledge"
Conviction and Persuasion
Reservation and Deferment of Judgment
Preliminary Judgment
"Prejudice, Its Sources and Main Varieties"

X. Probability
Explanation of the Probable
Difference of Probability from Verisimilitude
Mathematical and Philosophical Probability
"Doubt, Subjective and Objective"
"Skeptical, Dogmatic, and Critical Manner of Thinking or Method of Philosophizing " Hypotheses

Appendix: Of the Difference Between Theoretical and Practical Cognition
I. General Doctrine of Elements
First Section: Of Concepts
Second Section: Of Judgments
Third Section: Of Conclusions
II. General Doctrine of Method
I. "Development of Logical Perfection in Cognition by Definition, Exposition, and Description of Concepts"
II. Development of Perfection in Cognition Through Logical Division of Concepts
Index of Passages in Kant's Writings to which Reference is Made in the Notes
Index of Names
Index of Subjects

Fundamental Principles of the Metaphysics of Morals
RM27.00