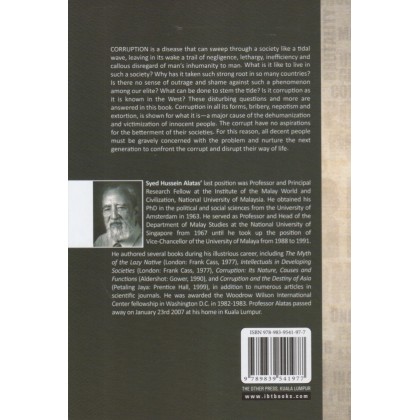 The Problem of Corruption - Softcover

Corruption is a disease that can sweep through a society like a tidal wave, leaving in its wake a trail of negligence, lethargy, inefficiency and callous disregard of man’s inhumanity to man. What is it like to live inside such a society? Why has it taken such strong root in so many countries? Is there no sense of outrage and shame against such a phenomenon among our elite? What can be done to stem the tide? Is it corruption as it is known in the West? These disturbing questions and more are answered in this book. Corruption in all its forms, bribery nepotism and extortion, is shown for what it is – a major cause of the dehumanization and victimization of innocent people. The corrupt have no aspirations for the betterment of their societies. For this reason, all decent people must be gravely concerned with the problem and nurture the next generation to confront the corrupt and disrupt their way of life.

Foreword to this Edition

Part One: The Sociology of Corruption

Part Three: The Struggle against Corruption