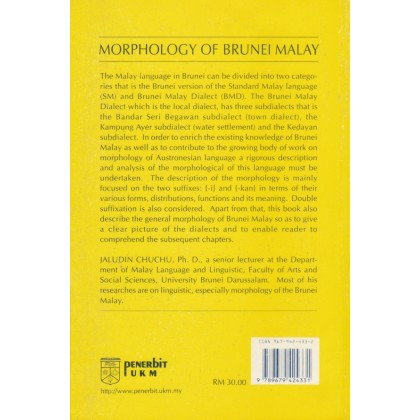 The Malay language in Brunei can be divided into two categories that is the Brunei version of Standard Malay language (SM) and Brunei Malay Dialect (BMD). The Brunei Malay Dialect which is the local dialect, has three subdialects that is the Bandar Seri Begawan subdialect (town dialect), the Kampung Ayer subdialect (water settlement) and the Kedayan subdialect. In order to enrich the existing knowledge of Brunei Malay as well as to contribute to the growing body of work on morphology of Austronesian language a rigorous description and analysis of the morpholical of this language must be undertaken. The description of the morphology is mainly focused on the two suffixes: {-i} and {-kan} in terms of their various forms, distributions, functions and its meaning. Double suffixation is also considered. Apart from that, this book also describe the general morphology of Brunei Malay so as to give a clear picture of the dialects and to enable reader to comprehend the subsequent chapters.