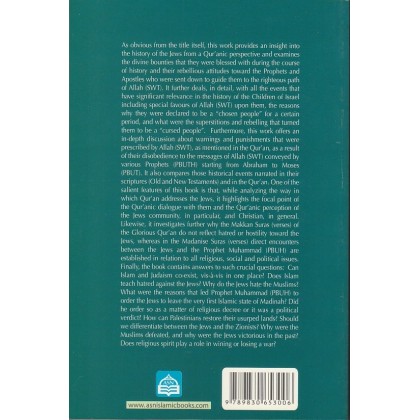 As obvious from the title itself, this work provides an insight into the history of the Jews from a Qur’anic perspective and examines the divine bounties that they were blessed with during the course of history and their rebellious attitudes toward the Prophets and Apostles who were sent down to guide them to the righteous path of Allah (SWT). It further deals, in detail, with all the events that have significant relevance in the history of the Children of Israel including special favours of Allah (SWT) upon them, the reasons why they were declared to be a “chosen people” for a certain period, and what were the superstitions and rebelling that turned them to be a “cursed people”.

Furthermore, this work offers an in-depth discussion about warnings and punishments that were prescribed by Allah (SWT), as mentioned in the Qur’an, as a result of their disobedience to the messages of Allah (SWT) conveyed by various Prophets (PBUTH) starting from Abraham to Moses (PBUT). It also compares those historical events narrated in their scriptures (Old and New Testaments) and in the Qur’an.

One of the salient features of this book is that, while analyzing the way in which Qur’an addresses the Jews, it highlights the focal point of the Qu’ranic dialogue with them and the Qu’ranic perception of the Jews community, in particular, and Christian, in general.