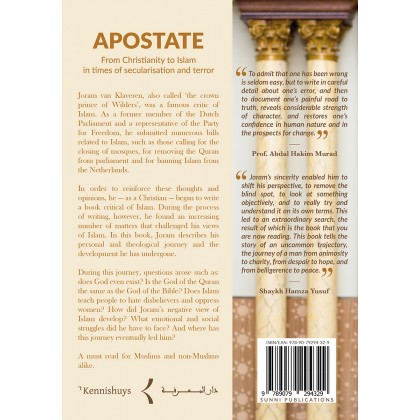 RM96.00
Apostate: From Christianity to Islam in times of secularisation and terror

Apostate: From Christianity to Islam in times of secularisation and terror - Softcover

Joram van Klaveren, also called 'the crown prince of Wilders', was well known as a long standing critic of Islam. As a former member of the Dutch parliament and a representative of the Party for Freedom, he submitted numerous bills related to Islam , such as those calling for the closing of mosques, for removing the Quran from the parliament and for banning Islam from the Netherlands.

In order to reinforce these thoughts and opinions, he - as a Christian - began to write a book critical of Islam. During the process of writing, however, he found an incresing number of matters that challenged his views of Islam. In this book, Joram describes his personal and theological journey and the development he has undergone.

During this journey, questions came up such as: goes God even exists? Is the God of the Quran the same as the God of the Bible? Does Islam teach people to hate disbelievers and oppress women? How didi Joram's negative view of Islam develop? What emotional and social struggles did he has to face? And when has this journey eventually led him?

A must read for Muslims and non-Muslims alike.

3. Classical arguments for the existence of God

4. The Concept of God in Christianity

5. The Concept of God in Islam

6. Muhammad: Messenger in a Biblical sense?

"To admit that one has been wrong is seldom easy, but to write in careful detail about one's error, and then to document one's painful road to truth, reveals considerable strength of character, and restores one's confidence in human nature and in the prospects for change."

"Joram's sincerity enabled him to shift his perspective, to remove the blind spot, to look at something objectively, and to really try and understand it on its own terms. This led to an extraordinary search, the result of which is the book that you are now reading. This book tells the story of an uncommon trajectory, the journey of a man from anomosity to charity, from despair to hope, and from belligerence to peace."